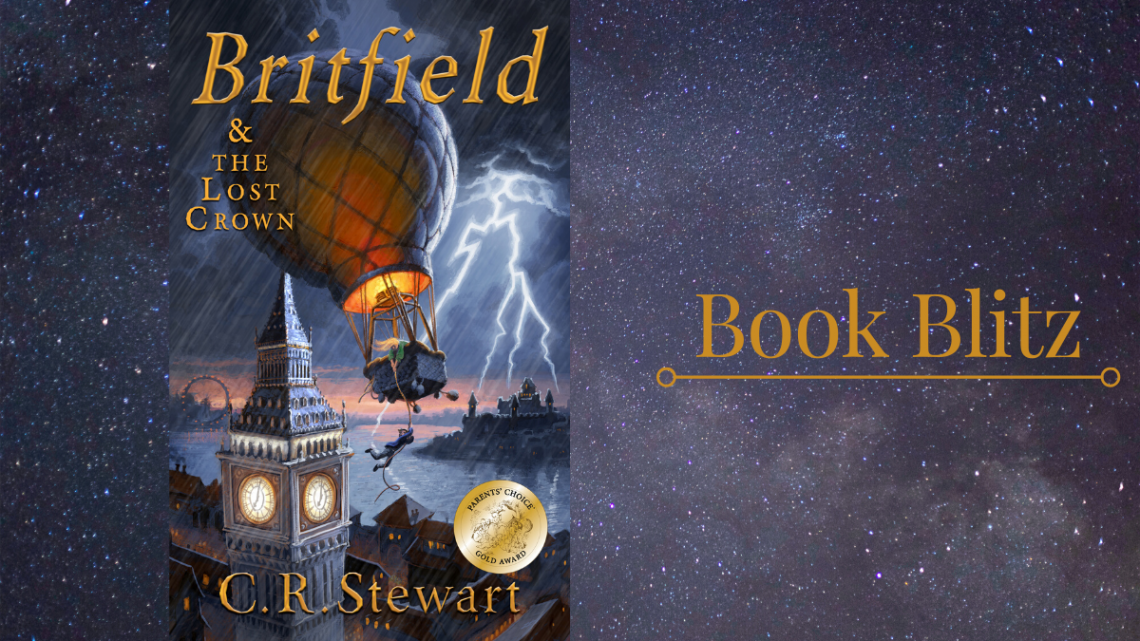 I am thrilled to be hosting a spot on the BRITFIELD & THE LOST CROWN by C.R. Stewart Blog Tour hosted by Rockstar Book Tours. Check out my post and make sure to enter the giveaway!

Britfield & the Lost Crown is the first book in a thrilling seven-part series for middle school and young adult readers. It will inspire children to engage both their creativity and their critical thinking skills as they encounter actual places, authentic characters, and exciting but realistic events in seventeen action-packed chapters.

Based on family, friendship, loyalty, and courage, Britfield & the Lost Crown and its hero, Tom, take readers on an epic adventure across England – from the smoldering crags of Yorkshire to the heart of London and, finally, to the magnificent shores of Dover.

With help from his best friend, Sarah, and a hot air balloon, Tom flees Yorkshire, escaping from Weatherly Orphanage and the clutches of a relentless detective, in pursuit of the truth about himself and his heritage: Are his parents still alive? Is he the true heir to the British throne? As Tom and a memorable cast of both heroic and dastardly characters unravel a royal mystery that could change the course of history, readers are taken on a breathless journey to a surprise ending that will leave them clamoring for more .

Built on more than seven years of extensive research and development, Britfield & the Lost Crown creates a real world that readers can embrace as it weaves accurate geography, literature, architecture, and history into its fast-paced story. With stimulating language and active writing, Britfield engages the reader from the first pages and doesn’t let go until it reaches its exciting conclusion.

A strong breeze shot across the sky as Sarah and Tom followed the pack of balloons over Oxfordshire. Known as the Thames Valley, this lush countryside was a multicolored patchwork of square farmlands crisscrossed by hedgerows and rock walls. The Thames River gracefully snaked through the open fields covered with extravagant mansions built centuries ago. Although most of the balloons headed toward Canterbury, some floated off in opposite directions. By mid-afternoon, most of them had vanished. Tom and Sarah followed behind a few but soon lost them in the hazy clouds. Every so often, Tom gave the balloon a long blast of hot air to maintain its altitude. While they drifted southeast toward London, their main concern was Gowerstone. Peering through the binoculars,

Tom searched for the helicopter.

“For the moment,” he added with caution.

As Sarah admired the scenery, Tom reached into his pocket to retrieve her locket.

“This really does bring me luck,” he concluded, handing it to her. “Thanks for letting me borrow it.”

“It’s yours, silly,” she smiled, pushing it back. “Just promise you’ll always keep it with you.”

“All right . . . it’s a deal.” Stuffing it back in his pocket, he felt the piece of paper Patrick gave him and removed it.

“What’s that?” she inquired curiously.

“Before we left, Patrick broke into the Grievouses’ office and looked through my file. He wrote something down.”

Tom opened it. Scribbled across the page was just one word.

“What does it say?” she demanded.

“Britfield? What the heck does that mean?”

“How am I supposed to know?”

“There must be more.” She snatched the paper from his hand and thoroughly examined both sides. Dissatisfied, she shook her head. “So Patrick breaks into the office, sneaks your file out, and writes only one word on it — is he mad?”

“I’m sure he was in a hurry,” his voice deepened, “given that we were planning to rescue you and everything.”

This comment caught Tom off guard. After all these years of having only a first name, it was a lot to digest and felt rather strange.

“Maybe,” he shrugged, not sure what to think.

Reviews for BRITFIELD & THE LOST CROWN

“The story was everything the cover promised. I felt like I was in a kid version of Mission Impossible. I was on the edge of my seat with narrow escapes, daring plans and unexpected adversaries.”- Reader Views Kids, Autumn, Age 14


“Along with its relentless action and suspense, Stewart’s novel provides young readers with a wealth of information about British culture (with frequent references to literary classics) and the history of the Monarchy and the Anglican Church. Highly recommended, Britfield and the Lost Crown will appeal to both young readers and their parents.”- Parents’ Choice Awards – Gold Medal


“In this series opener, Stewart offers nearly nonstop action, with escapades both perilous and amusing, and exhilarating hairsbreadth escapes. The conspiracy is bold and compelling while the plot folds in intriguing facts about British culture, history, and famous sites.”- Kirkus Reviews

“An Intriguing first-in-series read that is sure to capture the attention of the middle grade and young adult crowd. Britfield weaves plot, texture, storytelling, and fascinating characters into a winning combination and enriching experience.”- Chanticleer Book Review – 5 Stars

“This fast-paced, vivid tale has many twists and turns which keep tween readers turning the pages,”- Eric Hoffer Award

“A thrilling tale with loads of adventure and unexpected twists that will captivate youth audiences. Recommended for home and school libraries.”- Children’s Literary Classics – Gold Medal

“This is a far-flung adventure story that will readily interest the target audience. Stewart writes in clear, descriptive prose and integrates alluring and novel details that at times harkens back to an earlier era, an effect that offers an element of timelessness to the storytelling.”- The Booklife Prize

“Such a thrilling book  filled with so much awesome history about England, crazy mysteries, and truly amazing characters. It had me hooked every second of reading it!!
-Hannah, Age 13, Kids’ Book Buzz – 5 Stars

“Narrator Ian Russell carries listeners along for a thrilling, fast-paced adventure about two kids, Tom and Sarah, who run away from a bleak Yorkshire orphanage. Pursued by a determined police detective, they face even more danger when Tom discovers a clue about his ancestry that may link him to the royal family and a plot to eliminate his bloodline–including him. With varied accents and voices, Russell transports listeners to England and brings each character to life. As hot-air balloon crashes, several narrow escapes, and a white-knuckle chase through London ensue, Russell ramps up the pace of his narration, making the danger all the more palpable.”– Audiofile Magazine

Tom and Sarah’s adventures are masterfully narrated by award-winning voice actor Ian Russell, who provides memorable voices to all the tale’s characters. Along with its relentless action and suspense, Stewart’s novel provides young readers with a wealth of information about British culture (with frequent references to literary classics) and the history of the Monarchy and the Anglican Church. Highly recommended, Britfield and the Lost Crown will appeal to both young readers and their parents.”
– Parents’ Choice Foundation – Gold Medal Award

“Britfield & The Lost Crown was conceived as an idea over 10 years ago while enduring a boring finance seminar. It started as a sketch of a hot air balloon with a young boy and girl trapped inside. From this simple drawing sprang the entire concept and story for Britfield.”

C.R. Stewart received a Bachelor of Arts in British Literature and European History from Brown University; did post- graduate work at Harvard University; earned an MBA from Boston College; and is pursuing a Master of Science in Advanced Management and a PhD in Strategy.

Now based in San Diego, C.R. Stewart is a strong supporter of education and the arts. He enjoys world travel, reading, riding, swimming, sailing, tennis, and is currently on a National School Book Tour with Britfield & The Lost Crown speaking to students on the importance of creativity!

5 winners will receive a signed finished copy of BRITFIELD & THE LOST CROWN & a poster, US Only.